You are here: Home / Bacteria / Bacteria in Water: Coliforms, Iron and Sulfur Bacteria

While we do tend to focus on indoor Mold and Bacteria in our reviews, there are obviously other microbes to consider especially bacteria in water. In the past, we’ve mentioned Legionnaires’ disease, which is a disease caused by a waterborne bacterium.

Here we’ll discuss three other types of bacteria in water: coliforms, which, although not usually harmful, can be a sign of other bacteria that are harmful; and iron and sulfur bacteria, which are seen as annoyances rather than a health threat.

Coliforms are a group of indicator bacteria that are associated with the intestinal flora of warm-blooded animals. That is, they live in the intestines of humans and animals. Most coliforms are non-pathogenic. However, coliform bacteria in water may indicate sewage contamination.

Most people are familiar with E. coli, which makes up a large percentage of fecal coliforms found in samples. E. coli can potentially cause a wide range of health problems (for instance, almost everyone has heard of the now-familiar O157:H7 strain of E. coli that caused the deaths in Walkerton), and because of this, should not be ignored if found in drinking water.

The reason that coliforms are used as an indicator of pathogens in water is that they act in a similar fashion to the pathogens, they need similar growth requirements and environments, and they are generally easier to culture. Their presence is taken as a sign that the more dangerous bacteria are also there.

Testing for coliforms is a simple and straightforward process, but there are a few mistakes to avoid when doing so. For example, a common mistake is to immediately collect a sample of water from a faucet. There is far more likelihood of getting a false positive from the stale water sitting in the tap, so the faucet (or pump, if it is a well) should be run for a few minutes first.

When coliforms are present, the treatment is usually to chlorinate the system. Chlorine is toxic to coliforms, and is the most common type of water-disinfection agent.

Iron and Sulfur Bacteria in Water

Iron and Sulfur bacteria are an annoyance more than a health hazard, but they can be incredibly damaging to the plumbing systems that they grow in. 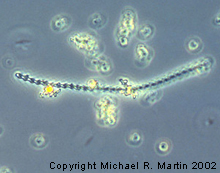 Iron bacteria tend to grow in wells. Iron is very common in ground water, and these bacteria oxidize the iron, producing a brown slime which may produce odors, cause rusty discolouration of the water, and clog water systems. They can grow and multiply very quickly, sometimes taking only a few months to stop up a system.

Sulfur bacteria are similar to iron bacteria, both in the way they behave, and in their overall effects. The odor they produce is a ‘rotten egg’ smell that is the most noticeable sign of contamination. They can produce a black slime, and the gas they produce can be corrosive to the water systems involved.

Iron and sulfur bacteria can also live together in a system, so it can be very difficult to determine whether the problem microbe is one, the other, or both. They are treated in the same manner, however, and that can consist of shock-chlorination (much higher levels than for coliforms), acid-treatment, or super-heating.

Remember that not all bacteria is dangerous. Read our next post about which bacteria are good for you.

ARE YOU ENJOYING Mould And Bacteria Reviews Newsletter? Share it with friends and associates by simply clicking on “Forward” in your e-mail program.

« Dimorphic Fungi: What Are They?
The Mould Fusarium: How Does It Affect Our Lives? »