Peziza domiciliana, variously referred to as domicile cup fungus, peziza mushroom and Peziza fungus among other names, is a common household fungus that grows in indoor environment. It is usually associated with water-damaged buildings. “Domiciliana” means “around the house”. It is found in a wide range of habitats including carpets in living rooms, shower stalls, damp closets, behind refrigerators, around leaky water beds, in cellars, greenhouses, under porches, damp walls, and even in cars. Peziza is the sexual state (or what mycologists call teleomorph) of this fungus. The asexual state (i.e., the anamorph) is called Chromelosporium. Just like Peziza, Chromelosporium can be found colonizing indoor surfaces of damp buildings.

Peziza domiciliana is currently not known to be poisonous, but it is considered inedible due to its rubbery texture. No information is available regarding health effects, toxicity, or allergenicity to humans. Whether the spores (ascospores) causes allergic reactions in humans is not known either. However, the spores of many fungi potentially can cause respiratory problems in susceptible individuals.

How to get rid of Peziza domiciliana in a house

Luckily, Peziza does not destroy wood although often incorrectly identified as dry rot fungus, Serpula lacrymans. While it is not difficult to remove, merely plucking off the cups (fruiting bodies) or applying bleach may not get rid of it since the bulk of the growth is likely embedded in the material it is growing on. Peziza thrives in damp conditions and hence a useful indicator of moisture problems. To get rid of Peziza domiciliana, eliminate the source of water and it will rapidly die. 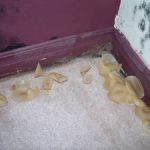 Peziza domiciliana, variously referred to as domicile cup fungus, peziza mushroom and Peziza fungus among other names, is a common household fungus … END_OF_DOCUMENT_TOKEN_TO_BE_REPLACED

Molds are commonly found in buildings and homes. They grow in damp or wet places such as around leaks in roofs, windows, or pipes, or where there has … END_OF_DOCUMENT_TOKEN_TO_BE_REPLACED

Fungi are present in virtually all environments and affect us in many ways. Spores of many fungal species have been documented as important causes of … END_OF_DOCUMENT_TOKEN_TO_BE_REPLACED