You are here: Home / Search for "Aspergillus"

Aspergillus fumigatus is a thermotolerant/thermophilic fungus capable of growing over a wide temperature range (12°C–53°C). It has a worldwide distribution. Being thermotolerant, it is a significant component of compost microflora.

Aspergillus fumigatus naturally occurs in decaying organic material, but because it is a thermotolerant fungus it grows well at raised temperatures experienced during the composting process. Within the indoor environment, A. fumigatus belongs to the group of indicator microorganisms typical of moisture-damaged buildings such Stachybotrys, Chaetomium, Fusarium and Ulocladium. The following characteristics make A. fumigatus a ubiquitous opportunistic pathogen: 1) ability to survive and grow in a wide range of environmental conditions, 2) effective dispersal in the air, 3) physical characteristics that allow spores to reach deep into the respiratory system, and 4) ability to swiftly adapt to the host environment.

In hospital environment, air sampling may be conducted to monitor air quality during construction, to verify filter efficiency, or to commission new space prior to occupancy. Because aspergillosis cases have occurred when airborne fungal spore concentrations ranged as low as 0.9–2.2 colony-forming units per cubic meter (CFU/m3) of air, it is suggested that an air volume of at least 1000 L (1 m3) should be considered when sampling highly filtered areas.

Malt extract agar (MEA) can be used to sample for Aspergillus fumigatus. For selective isolation of A. fumigatus, a high incubation temperature of 37 to 40 is then used as this inhibits growth of other saprophytic fungi.

Preparing for the holidays can be an exciting time to share with loved ones.

Gathering up old holiday decorations and adding new ones to the collection has been a long standing tradition in many families.

This year however, there are a few precautions we urge people to take when purchasing ornaments and other decorations for mold contamination. The most recent recall of Signature Collection ornaments, picture frames and 43 centimeter red trees were found to contain Aspergillus mold.

Some Aspergillus mold can cause serious disease in humans and animals. Aspergillus fumigatus, Aspergillus flavus and Aspergillus clavatus are the most common to cause either pathogenic or allergenic reactions or both. Pulmonary aspergillosis can also result with symptoms that can range from fever, cough, chest pain or breathlessness. The most at risk group to contract aspergillosis after exposure to Aspergillus mold are those with weakened immune systems or lung disease.

Consumers have been recommended to immediately stop using these products, enclose them in a plastic bag, and return them to the nearest Papyrus or Carlton Cards store, or Schurman Retail Group’s Tennessee Distribution Center for a refund. Fortunately, at present the Schurman Retain Group, the United States Consumer Product Safety Commission (US CPSC) and Health Canada have not received any reports of incidents related to these products.

The recalled products were sold at Papyrus and Carlton stores across Canada and the United States from September 29, 2012 to November 21, 2012; 5,807 items in Canada and 10,450 items in the United States. Manufacturing of the recalled products was done in Pasig City, Philippines by Idianale Inc/Dekokraft. Distribution was through the Schurman Retain Group in Fairfield, California. Quality control during manufacturing, packaging and transportation may need to be assessed to determine where the contamination arose. 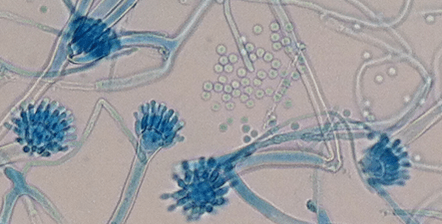 All laboratory staff at MBL are trained in identifying Aspergillus spp. If you have any concerns that products you have may contain mold, you can send in a sample of it to our lab to gain some peace of mind (either cut a piece of it, take a swab or a tape-lift). We wish you a safe and joyous holiday season. For information about our mold testing or bacteria testing services, please contact Mold & Bacteria Consulting Laboratories. Please call our Ontario, Mississauga Office at 905-290-9101 or the British Columbia, Burnaby Office at 604-435-6555.

Indoor air sampling for mould spores may be conducted to help in evaluating the air quality after occupants’ complaints of ill health, to determine the effectiveness of remediation procedures, to assess health hazards or to proactively monitor indoor air quality.

Mould spores enter a building from outdoors through:

Since under normal conditions indoor mould spores originate from outdoors, the common practice in mould investigation is to compare indoor airborne fungal populations and their concentration to those of outdoor samples.

While indoor/outdoor comparison can work fairly well for culturable air samples or non-viable samples with easy to identify fungal spores, it may not work all the time for non-viable air samples when the dominant spore types both indoors and outdoors are Aspergillus/Penicillium, unidentified spores, basidiospores, or ascospores.

Spores of Aspergillus and Penicillium are rounded or slightly elongated, and smooth or ornamented depending on the species. Since these spores have no other distinguishing characteristics, laboratories usually lump them together as Aspergillus/Penicillium when they analyze air by direct microscopy (total spore counts).

Unfortunately, there are many other genera and species which produce spores that are very similar and difficult to differentiate from Aspergillus and Penicillium.

Fortunately most of these are not as common indoors as the Aspergillus and Penicillium species.

Unidentified spores including ascospores and basidiospores also present problems when it comes to indoor/outdoor comparison if these spores are in high concentrations both indoors and outdoors. Trying to compare indoor/outdoor samples for these categories of spores could be erroneous since one could be comparing spores belonging to totally different genera.

Presence of significant numbers of Aspergillus/Penicillium and unidentified spores (including ascospores and basidiospores) in the indoor environment is indicative of poor air quality.

However, it’s difficult to tell from these results whether the indoor spores originated from outdoors and whether the spores belong to Aspergillus/Penicillium or other moulds with similar spores. The solution to this problem would be to collect culturable air samples.

Culturable air samples could help in characterizing most of these moulds if they grow and produce spores in culture.

Aspergillus clavatus is often associated with allergic diseases in workers of malt-houses. Aspergillus fumigatus is the most important and well known potential pathogen for humans with weak immunity. It is of great concern in hospital environments. Spores of Aspergillus fumigatus are allergenic and have the ability to bind on lung epithelium causing complications in the health status of asthmatic individuals.

Combining sampling for viable and non-viable analysis has one major advantage. Non-viable sampling could give a better estimation of the total spore concentration for Aspergillus/Penicillium and the results could be obtained within the same day of sampling. Sampling for viable analysis on the other hand could give an estimate of the viable portion of the Aspergillus/Penicillium groups detected with the non-viable sampling.

It is however, important to note that results for non-viable and viable samples sometimes show no correlation. This is understandable because apart from the differences in sampling devices, there are other factors that could influence the results obtained with either viable or non-viable samplers.

The important points to consider when sampling air for members of the genus Aspergillus are:

Efficiency of the Air sampler

The size of spores of Aspergillus species ranges from 2 to 10 micrometres (microns). A sampling pump that is most efficient at this size range should be selected. Most volumetric samplers are less efficient for spore sizes less than 5 microns.

Aspergillus species can grow over a wide range of substrates. However, with the exception of a few species, they generally grow well on low water activity substrates (that is they are xerophilic). One of the media recommended for xerophilic moulds is Dichloran 18% Glycerol Agar. This is a general-purpose low water activity medium that selectively support the growth of xerophilic moulds or moulds that prefer dry environments. A second advantage of DG18 is that it restricts the colony diameter thus preventing colonies from overgrowing each other and hence easy to enumerate. DG18 also inhibits bacterial growth ensuring that bacteria do not interfere with mould growth.

Sometimes it is hard to know how contaminated the environment being sampled is. In this case, initial non-viable air samples may be taken and analysed immediately to give an idea of the level of contamination.

The sampling location and height from where the samples are taken can influence the results obtained. The location should generally correspond broadly with the breathing zone or about a height of 1.2 meters. If one is interested in detecting the source of Aspergillus growth,samples should be taken near the suspected sources of contamination. Multiple samples are recommended since they would highlight variation of airborne mould concentrations with time and also location.

Air sampling on growth media has one major limitation. Only those mould propagules (spores and hyphal fragments) that can grow on media are detected. Although this may not apply to species of Aspergillus, it is estimated that only 10-15% of airborne mould propagules may be viable.

The mold Aspergillus has close to 200 species and varieties.

Aspergillus: Should It Worry You If You Find It in Your Home or Office?

MBL is commonly asked if these types of molds are dangerous. In reality, species of Aspergillus affect our lives in several ways:

The black mold, Stachybotrys, is a well known producer of toxic byproducts (mycotoxins). The species most common in building environment are … END_OF_DOCUMENT_TOKEN_TO_BE_REPLACED

Quite often home buyers are confronted by the fact that the home they wanted to buy was said to have mold. Is it okay to buy a house with mold in it? … END_OF_DOCUMENT_TOKEN_TO_BE_REPLACED